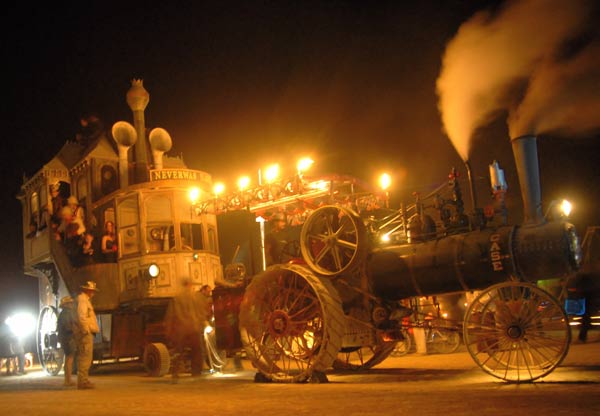 Kinetic Steam Works (KSW), a Bay Area collective dedicated to steam powered kinetic art, came together in 2005 to explore and repurpose the artifacts of clockwork modernity. Since then they've brought to life nearly a dozen pieces of art that have displayed awesome feats of steam power for Bay Area audiences at events like Maker Faire, Sand by the Ton and Best of the West. I first discovered KSW at Maker Faire a few years ago and was so impressed with their steam engines that I had to learn more!

If you've ever been interested in the steampunk genre, engines or steam then KSW is for you. As KSW mentions on their site, the reasons for exploring steamworks are inspired by the technological and romantic notions of yore:

"The steam engine embodied the ideologies, desires and dreams of its era, of Jules Verne and H.G. Wells, a bright and shining future where technology was built by hand. They were the aspirational finned cars and rockets of their day. Most recently, steam has been represented by romantic industrial arts and the literary movements of retro sci-fi, steampunk, and gothic neo-Victorianism. The arch modernity of the steam-driven Industrial Revolution is a powerful metaphor that explores our present and future through the nostalgic past."

Hortense is the first engine in KSW's steam power collection. The traction engine is used to power the larger kinetic art pieces. The Case can power kinetic art via the flywheel and belt drive, pulling and/or pushing a moving display, or through auxiliary steam lines providing direct steam pressure.

The other centerpiece of their collection is Pappy (seen below), a 1917, 75 horsepower, J.I. Case Traction Engine that has been lovingly restored by the KSW team. 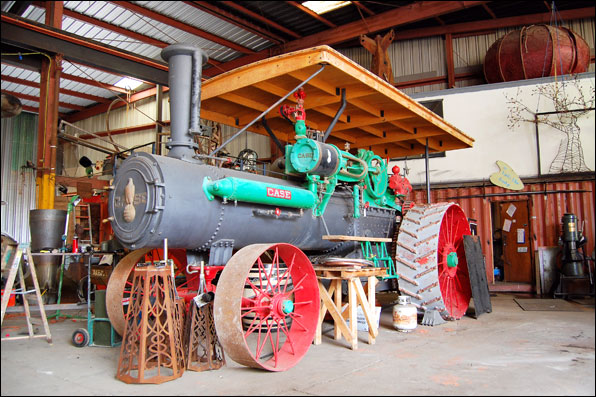 KSW is always looking for volunteers and donations. For more information on getting involved, visit their website.