Homelessness and Coronavirus: What Bay Area Counties Are Doing — And How You Can Help Stuart Malcolm, a doctor with the Haight Ashbury Free Clinic, speaks with homeless people about the coronavirus (COVID-19) in the Haight Ashbury area of San Francisco California on March 17, 2020. - Cities across the nation are worried about the homeless population as the coronavirus pandemic surges with the US death toll reaching 100. (Josh Edelson/AFP/Getty Images)

San Francisco city officials said Monday they had identified more than 8,000 hotel rooms to possibly use to house people who need a place to self-isolate as the city tries to slow the spread of the coronavirus.

Trent Rhorer, director of the city’s Human Services Agency, said he expects the city will need to rent hotel rooms for up to 4,500 people. So far, the city has communicated with 31 hoteliers who said they have rooms available for rent, he said.

The first priority will be given to people who have tested positive for COVID-19 or who are awaiting test results but don’t have a home where they can quarantine alone. This could include people experiencing homelessness, living in residential hotels or other congregate settings, such as shelters. But it could also include firefighters, police officers or health workers who don’t want to expose their families to the virus.

A coalition of San Francisco County supervisors is also pushing for the city to offer hotel rooms to anyone who is homeless and doesn’t have anywhere to shelter in place – regardless of whether they are experiencing symptoms of the virus or are considered at risk.

"We believe that just like you and I, they should have an opportunity to keep themselves safe," said Supervisor Hillary Ronen. "[They should be able] to shelter in place and keep all of us safe."

More than 300 rooms were available as of Monday, Rhorer said. The city has leased rooms for 60 people so far. The city hopes to allow people to move into more rooms as early as Tuesday.

City officials also intend to use hotel rooms to relieve pressure on hospitals.

Dr. Grant Colfax, the head of San Francisco’s Department of Health, said “twenty to thirty” patients at Laguna Honda Hospital right now are well enough to get care outside of the hospital and will be offered hotel rooms. He described the patients as people “physically and mentally able to be supported outside a hospital setting,” who are not under investigation for having the coronavirus.

The news came as counties across the Bay Area mobilize resources to protect residents who are homeless during the coronavirus pandemic.

Gov. Gavin Newsom's office announced last week that it would spend up to $150 million in emergency funding to lease hotel rooms and purchase trailers to house people experiencing homelessness and help slow the spread of COVID-19.

The state is using $50 million to buy about 1,300 travel trailers and to help cities and counties lease hotel rooms, Gov. Gavin Newsom said Wednesday. More than 950 hotels and motels across the state have been identified as potential lease sites, he said.

'If this begins to spread, there will be a lot of casualties. So people are upset and fearful.'Sandy Perry, president of the Affordable Housing Network of Santa Clara County

The state is also distributing $100 million of the emergency funding to cities and counties to support shelter services and respond to the outbreak among homeless residents in their communities.

Assuming a potential 56% attack rate, state public health officials anticipate some 60,000 homeless people could contract COVID-19, Newsom said, just one of the many scenarios the state is modeling. If it manifests, California would need upwards of 19,000 new hospital beds, he said.

“That creates a deep point of anxiety for the existing population but moreover for our health care delivery system,” Newsom said, “and our capacity to move people in and out of the shelter safely without contacting other people and putting them at risk.”

The intensified search for places where people living in encampments and shelters can self-isolate came just three days after a man in Santa Clara County became the first person in California experiencing homelessness to die of COVID-19.

The Santa Clara County’s Public Health Department declined to say where the man was living or if he could have exposed others to the virus. But news of his death had many people in the South Bay’s homeless communities on edge.

Public health officials said that the virus can spread more quickly in shelters and encampments because of the close proximity to others and limited access to clean water and soap.

Homeless people are also more vulnerable to the disease because many have underlying health conditions. Last year, 12% of the county’s homeless population was 61 years old or older, according to the county’s biennial homeless count.

“If this begins to spread, there will be a lot of casualties,” said Sandy Perry, president of the Affordable Housing Network of Santa Clara County. “So people are upset and fearful.”

Here is what Bay Area counties are doing to protect residents who are homeless and how you can help:

On March 10, San Francisco city officials announced they had leased 30 RVs to house people who were confirmed to have contracted COVID-19 and needed to self-isolate. It also identified more than 8,000 to potentially house people who need to be quarantined.

The city also appropriated $5 million to expand cleaning at shelters, resource centers and residential hotels. It will also use that money to increase meal offerings and expand shelter hours.

City officials in San Jose have distributed hand washing stations, portable toilets and clean water to 14 encampments, as well as arranged for trash pickup. San Jose has also paused sweeps of encampments and halted evictions of renters who have lost income from the COVID-19 health emergency.

The city is also partnering with the nonprofit WeHOPE to operate a mobile medical trailer with virtual doctor’s visits. The organization will help distribute hygiene kits with hand sanitizer, gloves, masks, fresh fruit and healthy snacks to encampments on a bi-weekly basis.

Santa Clara County officials say they have offered guidance in multiple languages to people living in shelters and in encampments and given that same guidance to homeless services providers. The county is deploying mobile healthcare teams to first help homeless seniors or people who have underlying health conditions. And officials say they are developing a plan to distribute hand washing stations, portable toilets and clean water to encampments.

To bring more people inside, Santa Clara County said it is working to expand shelters. This would also allow people to have more space inside the shelters for social distancing. It’s also working to provide shelters with more hygiene kits, medical supplies and washers and dryers. In addition, the county said it is looking at finding properties for people living in shelters who might need to quarantine.

As of Wednesday, however, it was unclear how soon additional housing and hygiene kits would be available. 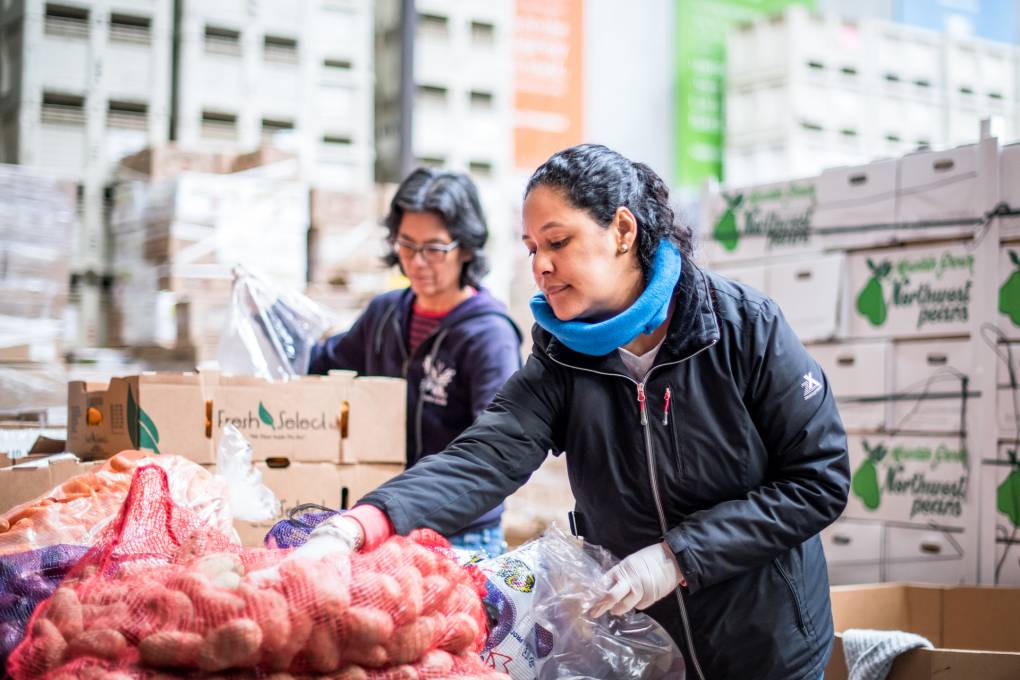 Look Up Local Food Banks That Need Your Help

Alameda County and Oakland city staff are also providing shelters and transitional housing providers with cleaning supplies and CDC guidance for quarantining or treating any residents who show symptoms for COVID-19.

On Monday, March 16, Gov. Newsom announced that about 390 rooms in two hotels near the Oakland airport will be used to provide isolation and quarantine for unsheltered residents who are infected or exposed to the novel coronavirus. Alameda County is leading efforts to assess homeless individuals who meet the guidelines set by the state to be placed in the available rooms.

“We know community spread is happening in the Bay Area,” said Balram. “We need to be prepared for a positive case of COVID-19 in Alameda County’s homeless population.”

So far, San Mateo County officials say 50 people who were unsheltered have been moved into three local motels. The county is working to expand that model and hopes to utilize motels to temporarily house more homeless individuals.

Information about social distancing, hand washing and hygiene protections is being shared with shelters and community organizations, the county said.

In Sonoma County, public health officials are offering guidance to homelessness service providers and shelters on how to practice social distancing and properly disinfect facilities.

“We are encouraging folks to find available shelter, and that may be through one of the shelters existing shelters in the county,” said Jennifer Larocque, spokesperson for Sonoma County.

Health officials at Contra Costa County say they have offered preliminary guidance to homelessness services agencies and shelters on how to identify and respond to homeless residents who develop symptoms. The county says it’s working to find isolation and quarantine facilities including hotels or motels.

For unsheltered homeless communities, outreach staff are distributing hand sanitizer and educational flyers on COVID-19 at encampments, say county health officials, including to people living in vehicles and RV’s.

Homeless service providers say they need donations to help buy more cleaning supplies and pay staff who are working overtime to get folks indoors and to keep facilities clean.

“We’re facing extreme scarcity right now,” said Candice Elder, founder of the East Oakland Collective. She said panic buying at grocery stores has made it difficult for her nonprofit to purchase and distribute canned goods, bottled water and hygiene supplies to homeless communities.

If you are healthy and don’t have any underlying health conditions, consider volunteering. Many homeless service providers rely on volunteers to make food, for example, or hand out supplies, and many of those volunteers have stopped showing up.

Small groups can do amazing things. Over the weekend, six volunteers with the organization People’s Breakfast Oakland served 150 meals to a homeless encampment in West Oakland.

“Mutual aid is essential at this time,” People’s Breakfast Oakland wrote in a Twitter post that showed organizers in N95 masks and gloves passing out prepackaged meals.

If you have a garage, an accessory dwelling unit or a spare room where you could house a healthy person until the shelter-in-place order has lifted, please consider opening your home. Service providers can help link you to a person in need.

The San Francisco Chronicle compiled a list of homeless organizations around the Bay Area. Find one near you.

This story was updated on Monday, March 23. Check back for more updates.