Marking a California Massacre — With a Native Ceremony of Forgiveness It’s rare to have a direct link to history in the way Clayton Duncan does. He’s 70, and he remembers his great-grandmother, Lucy Moore, who lived until 110.

Do the math, and you can see how Duncan heard stories as a child about her firsthand experience surviving a massacre in 1850.

Moore was one of the few who lived to recount what happened when the U.S. Army slaughtered a group of Pomo Indians on May 15, 1850, at an island known as Bonopoti. Pomo gathered at the island in Lake County to fish and collect medicine and plants. While U.S. soldiers murdered hundreds of men, women and children, 6-year-old Moore hid under the water.

Duncan says she survived because of a hide-and-seek game Pomo kids used to play, hiding under the water and breathing through hollowed-out reeds. And that’s what she did, until she came up hours later.

“She saw all her cousins and grandpas and grandmas, they're all just laying there dead. The water was all just full of blood,” Duncan said.

The attack was in retaliation for the deaths of Andrew Kelsey and Charles Stone, white cattle ranchers who were notoriously cruel to the native population. They forced Pomo to work as laborers on their ranch. Native people were often starved and beat, sometimes even strung up from trees as a form of torture.

"My mother would ask me, 'Why are you always walking around here mad? Let me tell you about Grandma. She used to pray, and she forgave those people, and she lived through it.'"Clayton Duncan

It all came to a head after Kelsey lashed a young Pomo boy 100 times, then shot him, allegedly for flirting with a Pomo woman Kelsey kept on his property as a concubine. Exasperated with the violence and oppression, Pomo men murdered Kelsey and Stone soon after.

Then, the U.S. military retaliated. A regiment of the 1st Dragoons of the U.S. Cavalry, commanded by Capt. Nathaniel Lyon and Lt. J.W. Davidson, massacred nearly the entire native population of the island. (You may recognize Lyon’s name — he's the first Union general to be killed in the Civil War, and there’s a famous street named after him in San Francisco.)

Now, the place once known as Bonopoti is called Bloody Island. The water and marshes have been drained. All that’s left is a grassy hill.

On the side of Highway 20 in Lake County, there’s a commemorative plaque that explains how Bloody Island got its name. It’s easy to miss it driving past, unless you’re looking for it.

Clayton Duncan petitioned the state to get the highway plaque installed. He lives just a few miles away, in Nice.

But to get to the actual site of Bloody Island, Duncan has to drive his Dodge Dart down a rutted road, on the edge of the hill that was the island.

On a recent visit, he wore a T-shirt proclaiming “I Am Not Your Mascot.” Lighting a bundle of dried sage, he fanned the smoke toward the grassy hillside where Bonopoti used to be.

“I can imagine my great-grandmother telling this story over and over and over,” Duncan said. "You know, what can we do about it? You know, we can't just let these people get away with it.”

The massacre has been well-documented, even when it happened back in 1850. Here’s an excerpt from an article that appeared in the Daily Alta California dated May 28, 1850:

“On the 1st of the month an expedition was fitted out against them, composed of a detachment of Infantry, and a company of Dragoons, under command of Lieut. Davidson ... with orders to proceed against the Clear Lake Indians, and exterminate if possible the tribe. The troops arrived in the vicinity of the Lake, and came unexpectedly upon a body of Indians numbering between two and three hundred. Little or no resistance was encountered, and the work of butchery was of short duration. The shrieks of the slaughtered victims died away, the roar of muskets that ceased, and stretched lifeless upon the sod of their native valley were the bleeding bodies of these Indians — or sex, nor age was spared; it was the order of extermination fearfully obeyed.”

But history was rewritten just three days later in the same newspaper, after a military officer questioned the original story. Here’s what the new version said:

“A party of Indians, living in and about the Sonoma district, after committing many murders and other outrages, in November last fled to Clear Lake ... This they have made their abode ever since, setting the troops at defiance and maintaining an attitude of hostility towards all the whites ... The men advanced in boats and were received with a shower of arrows. In the combat, many of the soldiers were seriously wounded, and a number of the Indians killed. The statement that women and children were massacred, is wholly unfounded.”

That history was echoed in 1942, when The Native Sons of the Golden West — known for commemorating the Gold Rush, California’s entry into statehood and the deeds of white California "pioneers" — put up a tiny plaque on a rock near the hillside. An article in Genocide Studies and Prevention: An International Journal analyzes how this plaque reflects a World War II mentality, when racism against Japanese Americans and others was heightened.

Ironically, an inaccurate plaque is closest to the scene. Today, it is splashed with red paint to signify the blood spilled there.

Duncan’s cousin, Lisa Peake, likes to come to the plaque to burn sage, purifying the area as she smudges with an eagle feather.

“I smudge and pray when I come here,” Peake said. “My grandparents were dead before I was even born. I feel it inside a lot. So I know when they say blood memory.”

There’s no way to confirm how many people were killed that day. Army estimates from the time calculated that about 200 people were killed. Duncan and other indigenous leaders estimate closer to 400 people lived on the island, and very few survived.

Duncan’s mom isn’t alive anymore, but he has a recording of her voice set to music. He played it from a CD out of his car stereo as he smudged the hillside with sage.

In the recording, Mildred Duncan explains how Lucy Moore and her mother — Mildred’s great-grandmother — both survived the massacre. They went up into the mountains, hunting animals and eating wild onions and potatoes. After about a month, they came back down and settled near Upper Lake. Listen below:

In an act of fierce determination, Lucy Moore lived more than a century after the massacre. She married a man much younger than she was, and survived to 110 years old. In her final years, she helped raise Clayton after he was born in 1950.

“My mom said she was talking our language, telling me what to do, telling me to go do this and that. And then every time she went out and prayed — she had cataracts so she couldn't see — but I’d run outside [and] bring her inside. I was like, her little eyes, you know,” laughed Duncan. “That's why out of our whole family, I took this on.”

Now, Duncan is raising his three grandkids who are about the same age he was when Lucy helped raise him.

He’s figuring out how he’ll tell them her story.

“You can imagine these guys with guns and bayonets, walking through these shallow places and looking for these people hiding, too. How can anybody feel proud of what my forefathers did?” he asked.

It took Duncan a while to learn how to forgive.

“My mother would ask me, ‘Why are you always walking around here mad? Let me tell you about grandma. She used to pray, and she forgave those people, and she lived through it,’ ” recalled Duncan. “And so I start thinking, what an ultimate human being. If I were to hurt any white man, I would shame my grandma’s prayer.”

Today, the descendants of those who were killed in that massacre are part of the Robinson Rancheria, and other rancherias, in Lake County. The nearby town of Kelseyville, named after Andrew Kelsey, has a historical marker where Kelsey and Stone are buried. But there’s no mention of the massacre that was carried out in their name.

Duncan wants to make sure people in Lake County don’t forget Bloody Island. He’s established the Lucy Moore Foundation in his grandmother’s memory. For the last two decades, he’s been organizing a Sunrise Ceremony of Forgiveness every May at Bloody Island where people from different tribes gather.

“We are spiritual people, we are the creator's people,” Duncan said. “We don’t start wars, we don’t steal, we don’t lie, and we don’t kill. Human beings don’t do that.”

Some locals who are white, like Charmaine Larsen, also attend the ceremony. 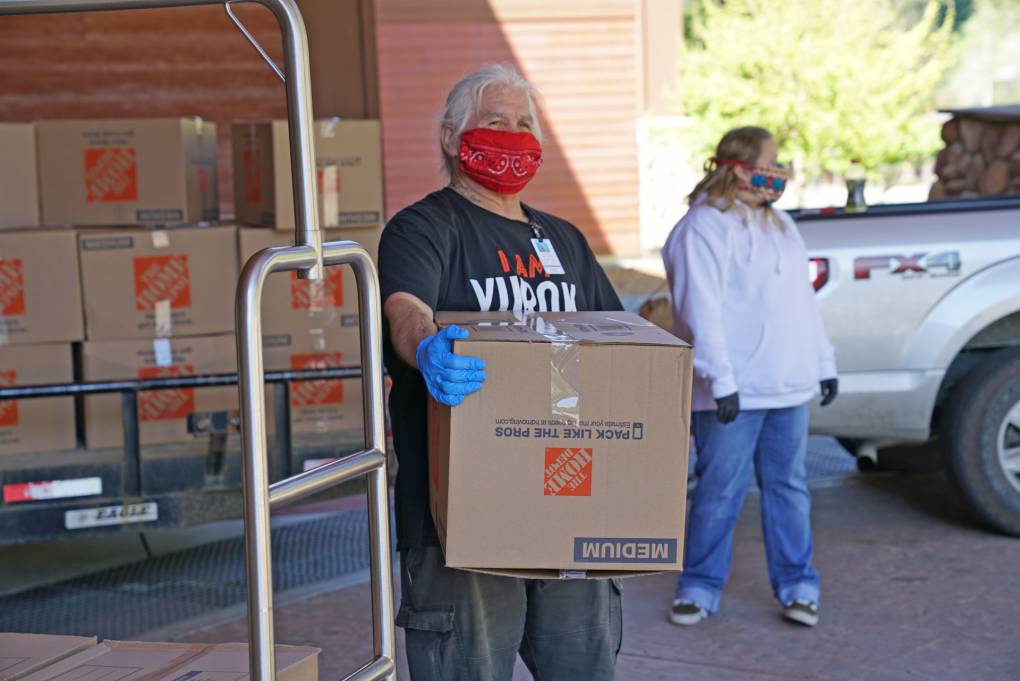 “We’re all fed some fake history from the time we’re born,” said Charmaine. “That’s not right. I don’t want to be told lies and I don’t want to believe lies. I want to help those bringing out the truth and stand behind what’s real.”

This year, Duncan plans to livestream the ceremony on May 16 at 5 a.m. — to respect social distancing rules under shelter-in-place orders.

It’s no surprise, he says, that Native Americans are disproportionately impacted by COVID-19. Just look at the history of smallpox and other contagious diseases that helped white settlers claim Native American land.

“It all goes back to inequality,” Duncan said. “Genocide is still in our mind and our soul.”

This story was reported as part of "Gold Chains: The Hidden History of Slavery in California." The project aims to lift up the voices of courageous African American and Native American individuals who challenged their brutal treatment and demanded their civil rights, inspiring us with their ingenuity, resilience and tenacity. Gold Chains is a collaboration between KQED, the ACLU of Northern California, the California Historical Society, Laura Atkins, and the Equal Justice Society.