9 Ways Trump Has Overhauled Immigration to the US Central American migrants traveling in the "Migrant Via Crucis" caravan sleep outside "El Chaparral" port of entry to the U.S. while waiting to be received by U.S. authorities in Tijuana, Mexico on April 30, 2018. (GUILLERMO ARIAS / AFP)

During President Trump's first term, the transformation of federal immigration policy has been far-reaching and so broad that experts say the effects could last for years — even if he isn't reelected. Here are nine ways he has overhauled immigration in the U.S.:

1. Trying to build a border wall

Trump’s pledge that he would build a wall on the Mexican border (and making Mexico pay for it) galvanized enthusiasm among his supporters, but it has proven difficult — and costly.

Congress approved much less money than Trump requested — $1.3 billion in the 2020 spending bill, rather than $8.6 billion. The president declared a state of emergency and channeled billions more from the Defense Department to Homeland Security. Advocates and a group of states led by California sued, and federal judges in California and Texas ruled that Trump was wrong to flout the will of Congress. But conservative court majorities have recently allowed construction to move ahead.

As of January, the government had built one mile of new barrier and 100 miles of replacement or secondary fencing — at a cost of almost $20 million per mile, NPR reported.

2. Restricting access to asylum
The administration may not have gotten far with a physical wall, but it has succeeded in erecting a virtual wall of regulations blocking tens of thousands of migrants from requesting asylum at the U.S.-Mexico border.

The law says that people who reach the U.S., regardless of how they get here, can be granted asylum if they can prove a well-founded fear of persecution.

In November 2018, Trump issued a federal rule barring people from applying for asylum if they didn’t enter the country at an official port of entry. Federal courts have blocked the rule and the case is currently before the 9th Circuit Court of Appeals.

Another rule, issued last July, made people ineligible for asylum if they crossed a “third country” on the way to the U.S. but didn’t apply for protection there. The U.S. Supreme Court allowed that policy to take effect while a lower court in California hears a legal challenge. Few migrants from Central America and beyond have pursued asylum claims in Mexico, so they are virtually shut out at the southern border of the U.S.

In 2019, Guatemala, Honduras and El Salvador signed agreements to receive and consider asylum-seekers that the U.S. sends them. So far, the Trump administration has flown scores of Hondurans and Salvadorans to Guatemala — despite the fact that 200,000 Guatemalans fled insecurity in their country last year.

Over the past year, Homeland Security officials also sent about 60,000 non-Mexicans back to Mexico to wait while their asylum cases are decided in U.S. immigration courts. People in the so-called Remain in Mexico program have found it next to impossible to obtain U.S. immigration lawyers. Only 187 people in the program — or 0.3% — have won their cases, compared to 30% of all asylum seekers last year, according to researchers at Syracuse University. Currently an estimated 20,000 people are camped in Mexico’s most violent cities, awaiting their day in court.

Removing migrant children from their parents at the U.S.-Mexico border was one of the Trump administration’s most controversial steps. Americans reacted to the sight of sobbing children with a broad, bipartisan backlash in 2018 that led President Trump to reverse the policy.

The separations began quietly in 2017 and increased in April 2018, after then-Attorney General Jeff Sessions announced a “zero tolerance” policy aimed at criminally prosecuting all adults — including parents — who crossed the border without authorization.
In 2018, a federal judge in San Diego ordered a halt to the separations and the reunification of families. More than 18 months later, perhaps as many as 2,000 of the more than 5,500 separated children still have not been reunited with their parents. 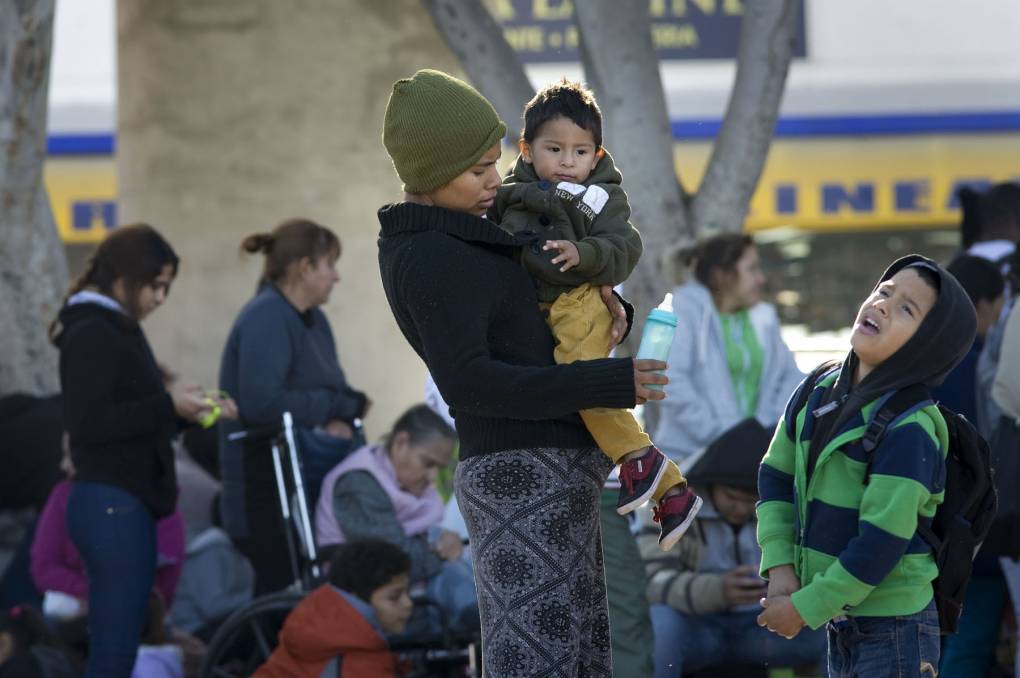 the lasting impact of trump

The government never got near its stated goal of “zero tolerance.” At its highest point, in June 2018, Customs and Border Protection referred 33% of unlawful border crossers to the Department of Justice, according to the Migration Policy Institute’s Sarah Pierce.

Since 2012, Deferred Action for Childhood Arrivals has granted temporary protection from deportation — and permission to work legally — to more than 800,000 young undocumented immigrants who were brought to the U.S. as children.

In 2017, the Trump administration moved to end the program, calling it an overreach of President Barack Obama’s executive power. The University of California, DACA recipients and others sued, and federal judges have kept the program in place for current recipients while the case is appealed. The U.S. Supreme Court is expected to rule this spring on whether the government followed administrative procedures when it tried to end DACA.

There are currently about 650,000 DACA recipients and nearly 200,000 of them live in California, many with children of their own.

With an executive order in his first days in office, Trump wiped away the immigration enforcement priorities of Obama’s later years, which had focused narrowly on deporting violent criminals and recent border crossers. Instead, Trump made just about any “removable alien” a priority.

As a result, the share of immigrants arrested by ICE who had no criminal record increased — from 14% in 2016 to 36% last year, according to the Migration Policy Institute’s Pierce.

Deportations of people arrested in the interior of the country have not reached Obama’s 2013 peak of more than 133,000. But nearly 86,000 people were deported last year, well above the 65,000 deportations in the last year of Obama’s presidency.

Trump has also tried to withhold funding from so called “sanctuary cities” that limit law enforcement cooperation with ICE. The courts rejected that, but earlier in February the administration sued New Jersey and a county in Washington over sanctuary policies.

In January, the U.S. Supreme Court ruled that the administration may expand the so-called “public charge” rule, even as the expansion is being challenged in court. The rule is a sweeping effort to restrict lower-income immigrants from becoming permanent U.S. residents.

The government has long denied green cards to people who used substantial cash assistance from the government. Now the rule applies to immigrants who have used, or might use, a broad range of non-cash benefits, including food stamps and MediCal — even for short periods. San Francisco and Santa Clara counties filed the first challenge to the rule, which some call a “wealth test,” saying it could hurt the U.S. citizen children of immigrants if their parents are afraid to apply for nutrition assistance and health care they need.

U.S. Citizenship and Immigration Services has also proposed almost doubling the fee to apply for citizenship, to $1170, while at the same time eliminating most fee waivers for low-income applicants. In December, a federal judge in San Francisco blocked the fee waiver rule.

Meanwhile, the processing time for green cards and for citizenship has almost doubled between 2015 and 2019.

The administration has also tried to terminate Temporary Protected Status for citizens of six countries allowed to stay in the U.S. following war or natural disaster. Roughly 400,000 TPS holders could face deportation.

A federal judge in San Francisco has temporarily blocked the administration from ending TPS for people from El Salvador, Haiti, Nicaragua, Sudan, Honduras and Nepal. The Ninth Circuit Court of Appeals is deciding whether to allow that injunction to stand.

8. Aiming to expand detention of children

Children in immigration custody — whether they are alone or accompanied by a parent — are protected by a two-decades-old legal settlement, known as the Flores agreement. It says children should be released to an adult sponsor — but if they remain in custody, it must be in a licensed child-care facility, not a jail-like setting.

In 2015, a federal judge in Los Angeles ruled that kids must be released promptly from ICE family detention centers, generally within 20 days. Last year, the Trump administration published federal rules aimed at replacing Flores, in order to allow long-term family detention — something the L.A. judge blocked.

Courts also ruled that the government must provide children with soap and water, adequate food and a place to sleep, regardless of crowding in border facilities.

Meanwhile, six migrant children died of illness in federal custody between September 2018 and May 2019.

The Trump administration has increasingly used the immigration courts — which are part of the Justice Department — to speed up deportations. In 2018, then-Attorney general Jeff Sessions stripped authority from immigration judges, barring them from dismissing or suspending low-priority cases, and setting a quota requiring every judge to complete 700 cases a year.

Stepped-up immigration enforcement beginning under President George W. Bush has contributed to a historic backlog of more than 1 million cases — and Sessions’ order for judges to re-open administratively closed cases adds another 300,000 cases.

Immigration judges say their limited discretion and the pressure to close cases faster is creating an unbearable work environment and threatening due process for immigrants whose lives are in the balance. Dana Marks, former head of the National Association of Immigration Judges, said that she and her colleagues are asked to decide the equivalent of “death penalty cases in a traffic court setting.”