With Bay Area housing the way it is, many of us are on the lookout for ways to save space. When you don't have a lot to work with it's imperative to maximize the usefulness of every overpriced square foot. To do that, some people are turning to the Murphy bed -- you know, those beds that fold up into a cabinet or wall when you’re not using them. What you may not know is that the Murphy bed was invented right here in San Francisco.

The story of the Murphy bed starts in an unlikely place — a gold mining town near Stockton, California. That’s where William Lawrence Murphy was born in 1876. He grew up on a farm with his parents and five younger siblings. His parents died when Murphy was 18-years-old, and the family farmhouse burned down soon after. Murphy needed a way to make money so he could support his siblings.

He tried all kinds of colorful jobs: stage coach operator, horse trainer, football coach, even small town sheriff. It was while living in the countryside that Murphy met and fell in love with Miss Gladys Kaighin, who was vacationing with her family in the mountains. Miss Kaighin was the opposite of rough and tumble Murphy. She grew up in San Francisco and sang soprano in operas. Her father was an executive in the railroad company; and her mother was a member of the California Club. Murphy was smitten.

He soon moved to San Francisco to prove to his crush that he could handle city living. He took a studio apartment at 625 Bush Street in downtown San Francisco.

Murphy was likely accustomed to more space than his new studio apartment afforded him, so he started tinkering with ideas to save space. He developed a bed attached to the doorjamb of his closet so it could fold inwards.

Family legend goes, he had a strong ulterior motive for this invention. At the turn of the 20th century, a young woman would never enter a man’s bedroom. That was a problem for Murphy who really only had a bedroom. In order to entertain Miss Kaighin at home, Murphy needed a parlor.

His “In-A-Dor” bed idea was the perfect solution. With one simple maneuver his bedroom became a parlor. Problem solved!

He soon patented the idea and married Miss Kaighin. Their wedding announcement in the July 28, 1912 edition of the San Francisco Examiner described the bride and groom this way:

“She is well known in social, club and musical circles, where her statuesque beauty has been considered typical of our most attractive California women. Mr. Murphy owns a large ranch in the northern part of the State.”

The couple stayed in San Francisco for several years, but eventually moved to New York City — another place known for tiny apartments. What started out as an idea to save space for working men like Murphy living in small quarters, became a status symbol in the 1920s. Apartments would advertise their Murphy beds and fancy hotels touted them as luxuries. 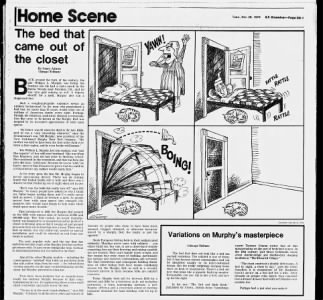 The folding beds also caught the eye of Hollywood studio executives who saw comic potential in the invention. Murphy beds have been featured in everything from Charlie Chaplin sketches, to Who Framed Roger Rabbit and Family Guy.

Despite (or maybe because of) all the screen time, bed sales started to fade in the 1930s and 40s. That’s when the Murphy Bed Door Company began expanding into efficiency kitchenettes, once again investing in products that save urban dwellers space.

Murphy beds aren’t nearly the big deal they were in the 1920s, but they have made comebacks at various moments in history. Whenever city living is popular, people want to save space. And Murphy’s original idea has led to some pretty cool designs. The Brooklyn Museum even has a bed that folds into a piano.

The museum description reads: "The amusing idea of sleeping in a piano (or a fancy parlor cabinet, in the case of the parlor bedstead) must have been part of the furniture's appeal."