A Brief History of Characters with Lethal Weapons for Limbs

Still mourning the loss of Merle? (OK, nobody's mourning the loss of Merle.) The recent passing of Merle Dixon on The Walking Dead and the smash success of the Evil Dead remake have us considering all the many people, mutants, and robots in pop fiction that have lethal weapons in place of limbs, either by force or by choice. Here's a look back at our favorite characters who have sacrificed boring ol' opposable thumbs (and some toes) for our entertainment.

The one that started it all. Drawing on stereotypical depictions of pirates with missing limbs (which apparently already existed in the early 1900s), Captain James Hook made his debut in 1904 in J.M. Barrie’s stage play Peter Pan; or, the Boy Who Wouldn’t Grow Up, which in turn became the novel, and later, the Disneyfied version, which depicts the Captain as more mincing than menacing.

OK, so it’s not really an attachment…Wolverine was born this way. Still, he and his claws endure as the epitome of stabby-handedness in all of pop culture. First appearing in an Incredible Hulk comic in 1974, he’s soon recruited by Professor X to join the new ‘70s incarnation of the X-Men. Wolverine was born with retractable claws made of bone, but as part of the Weapon X program, had every bone in his body laced with an indestructible metal called adamantium, resulting in the familiar snikt! we know today.

Wolverine, by the way, returns to the big screen on his own this summer.

Accidental bad ass Bruce Campbell treats himself to the mother of all augmented appendages in the Evil Dead trilogy’s second installment. Essentially a comedic remake of Evil Dead #1, Dead by Dawn finds horror hero Ash Williams back in the haunted cabin and fending off the same spirits. This time around, Ash is forced to lop off his right hand when it becomes possessed. Instead of making do with it, he gives himself an upgrade by attaching a chainsaw to his stump, giving birth to a cult-horror icon: the chainsaw arm.

‘80s Nintendo nerds everywhere (which is pretty much all of us, right?) fondly remember Mega Man, released for the NES in 1987. An android outfitted with a cannon on one arm, the original game encouraged players to fend off evil robots with the Mega Buster.

After his creator died in the middle of assembling him, Edward is forced to make do with scissors as stand-ins for hands. When he’s coaxed down from his creepy castle by a kindly Avon rep, he becomes the most bangin’ hairstylist-slash-topiary designer-slash-puppy groomer in town. However, as Wolverine eventually teaches us, the world doesn't accept blade-handed folk so readily: by the movie’s end, he’s driven to murder and back into exile by endless taunts from some small-minded, small-town antagonists. 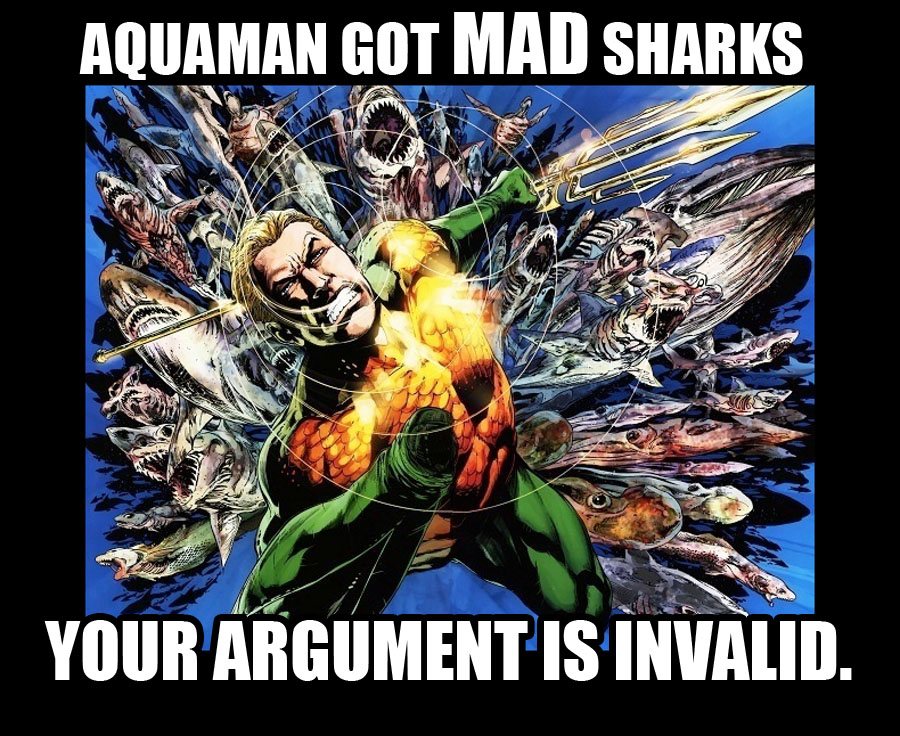 In the mid-‘90s, the infamously emasculated Aquaman is given a harpoon hand and a brooding backstory to go with it -- something about a power-mad tyrant stealing his ability to communicate with fish and also letting piranhas chew off his hand because hey, why not? Unsurprisingly, Aquaman still fails to resonate with most readers.

So far the only modified leg (and also the only woman) on this list, Rose McGowan’s portrayal of Cherry Darling in 2007’s gritty Planet Terror is the most recent major milestone in the history of weaponized appendages. Cherry gets outfitted with an assault rifle after zombies chew off her leg, and she quickly sets about mowing down the undead and some former attackers with it.

Were there any companions more beloved in DW’s modern era than the star-crossed (pun absolutely intended) Amy and Rory? In “The Pandorica Opens,” Rory, erased from time in a previous episode, returns as an Auton -- robotic beings that harbor guns inside their hands. As the result of an incredibly complex story arc, Rory accidentally shoots and kills Amy.

(Author’s note: I am amazed that I was not able to find an appropriate GIF of this. Shame on you, Internet.)

Merle Dixon, that loudmouthed, good-for-nothin’-even-at-the-end-of-the-world jerk with no soft spot to speak of, reunites with his old clan on The Walking Dead. In Season One, good-guy sheriff Rick handcuffed him to a roof to stop him from harassing other members of the group. When their location is swarmed by walkers, Merle is left behind. Give you one guess as to how he broke free. When he shows up again in Season Three, he's sporting one nasty blade where his right hand used to be.

In the no-nonsense remake of the camp classic, Ash is replaced by Mia, a recovering addict who finds strength not in rehab, but in vanquishing the evil forces that haunt her family’s remote cabin in the woods. SPOILER ALERT: the producers just can’t wait for the sequel and grant her the chainsaw arm one movie early.

Got any honorable mentions or major names to add? Let us know in the comments.