Not a day goes by that my wheat allergy doesn't adversely affect my snacking abilities. It's incredibly frustrating, especially because I'd really like to eat the pastries my coworkers bring into the office from time to time. But what's more irritating are the incessant comments from the peanut gallery about how "trendy" it is to be gluten free and how "everyone nowadays is gluten free." It's annoying because it's kind of true. It's impossible to deny that being gluten free has reached craze status in the U.S. Everywhere I look, ordinary products (like Rice Chex cereal for instance, which has always been made of the same ingredients) are now flying their "Gluten Free" banners proudly. Suddenly, its a thing. But that's the whole dilemma, it is a thing. Celiac disease is real, wheat allergies are real and gluten sensitivity is real, but hoards of bandwagoners have clouded this -- my, they are a heavy load aren't they?

If you're considering adopting a gluten free diet for its alleged health benefits, there a few things you may want to mull over. First of all, what exactly is gluten, anyway? Gluten is simply a protein found in the grains, wheat, rye and barley and it's pretty great. It gives dough that wonderful elasticity we all love so much. It makes bread rise and pizza crust so soft and delicious. However to some people, like those seriously affected by celiac disease, an autoimmune disorder of the small intestine which prevents it from absorbing necessary nutrients, it's the worst thing ever. It's responsible for stomach cramps, diarrhea and serious, irreversible intestinal damage. If left untreated, celiacs disease can lead to malnutrition, severe headaches and even increased risk of gastrointestinal cancer such as lymphoma. Basically, it's serious business. Those suffering from celiac disease have a one way ticket to Gluten Free-town. It's unlikely they'll ever get to sink their teeth into a legit slice of pizza for the rest of time (the horror!).

If celiac disease isn't all you thought it was cracked up to be, there's always a plain old wheat allergy. Wheat allergies are the most elusive of the gluten intolerances. Incredibly rare, wheat allergies are pretty tricky as wheat has several allergenic components. Thus, it can be difficult to pinpoint the severity of the allergy and often takes lots of trial and error to determine. Wheat allergies manifest themselves similarly to other food and respiratory allergies and cause a bevy of nasty side effects including eczema, nausea, palpitations and Irritable Bowel Syndrome.

Last but not least, there's gluten sensitivity. This includes the full spectrum of gluten disorders from stomach aches to celiac disease and everything in between. A 2012 study conducted by gastroenterologist Joseph Murray, M.D. of the Mayo Clinic concluded that gluten sensitivity is in fact on the rise. The study compared blood samples taken (and amazingly perfectly preserved) from Americans in the 1950s with blood samples taken today and found that the instance of gluten intolerance was now four times more common than it was 60 years ago. Approximately one is every 100 people has some problem with gluten and most are unaware.

Meanwhile, over one and a half million people adhere to a gluten free diet without being diagnosed with a gluten intolerance. Why? Well, as someone who has to follow a wheat-free regimen, I can't imagine anyone choosing this pain-in-the-butt path, but, if people think they can lose weight, they'll try anything. It's a very common misnomer that gluten free is some kind of modernized low carb diet, that eliminating gluten from your diet will automatically eliminate weight. This is incorrect. The truth is, following a gluten free diet is far more complex than just not eating bread and pasta. Wheat provides many vital nutrients to the body and removing it from your diet leaves you nutritionally unbalanced. Those who follow a gluten free diet (healthily) have to work very hard to make up the lost nutrients through alternative grains (such as millet or sorghum), vegetables and fruits. It's not a simple 1:1 exchange, it takes research and preparation to properly execute. You might as well just forget about a moist and scrumptious birthday cake; they're still working on a baking formula that doesn't crumble to bits. Being truly gluten free means you must think before you take a bite of anything. Did you know soy sauce contains wheat? What about salad dressing or your precious Red Vines? These all contain wheat and are potentially hazardous, if ingested by someone with a gluten intolerance. In other words, it's not a fun diet. Many confuse a lack of gluten with nutrition. This is also incorrect. In most cases (as in any that are not medically necessary), it's a lot healthier to just eat a well-balanced diet, heavy on the plants, low on the sugar. If gluten is not hurting you, there's no need to turn your back on him.

It feels confusing when people scoff at my allergy, as if I enjoy receiving attention for my deficiencies. I get a bit offended when people dismiss it as being trendy. My shoes are trendy, my diet is necessary. I don't think being gluten free is glamourous. It's not  a cool privilege to be gluten free, it's more like a sentence, always having to be hyper-vigilante with everything that slips past your lips. I wish it had been true that going gluten free caused me to drop some weight, but it did not. What going gluten free did was made my everyday life less painful. I don't avoid gluten to be thin, I do it to feel better. I wish there were more to it than that.

For those still gunning for the gluten free lifestyle, either by choice or circumstance, you're in luck. Thanks to a rise in gluten intolerance, manufacturers have gone out of their way to provide product after product of gluten free fare. Granted, one could successfully accomplish a gluten free diet without substitutes for processed foods; it is convenient to have them available when your burning desire for chocolate chip cookies reaches a boiling point. As I mentioned, food scientists are still toiling away working out a formula for a realistic tasting cookie and cake. I assume it's one of their top priorities. In the meantime we're lucky enough to enjoy a growing number of restaurants and bakeries that offer gluten free options. It might not taste exactly the same as the real deal, but it's a start and honestly, it's just exciting to have options. 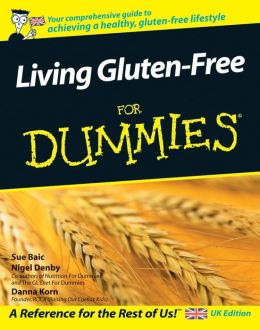 So maybe it is a fad. For those living with gluten intolerance, any attention to this issue is good attention. To the several million more who aren't yet aware of their intolerance, godspeed. It is a fad, but it's founded in fact. If you plan to go gluten free to be healthy and thin, you might want to reconsider. If you go gluten free because you have to feel better and protect yourself against serious medical consequences, more power to you. If you go gluten free cause you just feel like it, I'm not going to judge you. Do what feels good, I say. Just be aware that people are going to call you trendy.