If you thought late '90s MTV was just TRL and Pimp My Ride, you are sorely mistaken, friend. The Beavis and Butt-head animated spinoff, Daria, first aired on MTV on March 3, 1997 and we misunderstood high schoolers suddenly had a new hero. Daria's "anti-teen" monotone sass was intriguing. This was certainly not the picture of high school life normally depicted on television. This was a far cry from the melodrama of Sweet Valley High and the like. This was my kind of show.

As a protagonist, Daria spoke directly to any kid that didn't quite fit in, which, quite honestly, was a lot of us. She was able to tell a side of the story of high school social structure that hadn't really been told before. She was there for us, a non-excitable beacon of hope for the underdogs. But it wasn't just the fact that Daria was an oft-misunderstood oddball that attracted me to the show or the fact that Daria had a knack for seeing things for what they really are. The entire cast of characters added depth (or a lack thereof), humor and insight to the whole coming of age story. And besides all of that, I kind of had a cartoon crush on Trent. What I really found striking about the show though, I mean besides Trent's perfect, buttery '90s alt-rocker voice, were the lessons. We're not talking school lessons here, we're talking big time life lessons and, yes, these lessons were delivered by a cartoon.

As I mentioned, the cast of Daria had some rather sagacious things to say about life and how best to live it, whether they meant to or not. Perhaps it was accidental wisdom but wisdom just the same. Here are a few of my biggest take-aways from one of my all time favorite cartoons:

Sure, we all do it. As human beings, it's easiest for us to put things (and people) into mental compartments. It helps us make sense of things. But when it comes to labeling people, things can get a bit dicey.

A lot of Daria deals with labels; there's the jock, the cheerleader, the artsy outcast, the popular clique, and the brain. In just about every episode, Daria is referred to as a "brain" or a "loser" and clearly there's more to her than that. We can see the depth of her character, but her compatriots cannot. This is endlessly frustrating for Daria. However, it doesn't prevent her from doling out the same treatment to others. She dismisses most of what Britney and Kevin bring to the table (and for good reason as much of it is nonsensical) and she refuses to acknowledge any positive attributes of her sister, Quinn. It’s a seemingly endless cycle and it stinks. Eventually, though, Daria and her classmates come to the realization that there’s more to each of them than meets the eye and that taking the time to get to know someone without snap judgments is really the best bet.

Babes Can Also Be Bums

Daria’s first major crush is on (who else) Jane’s brother, Trent, a tattooed dreamboat of a rocker with several earrings and fledgling alternative band. Swoon city. She pines for him, she blushes when he speaks, she gets super nervous around him and can’t be her normal witty self. In other words, this crush is the real deal and, of course, unrequited. Trent spends most of his time sleeping and writing bad songs. This is still appealing to Daria. It isn’t until Daria visualizes Trent’s future, and boy is it bleak (picture future Trent: overweight, hairline receding and still not very motivated), that she realizes he might not be boyfriend material. Still, being easy on the eyes goes a long way.

Taking A Job You Hate Will Drive You Insane Mr. DeMartino hates his job. He hates it so much his eye bulges out of his head when he shouts sarcastic comments at his students, which is pretty much all of the time. It’s funny to witness but terrible to imagine. He’s a great teacher though, he taught me never, ever to settle for a career I despise because the cost is just too great. Now that’s solid advice.

It’s OK To Be Wrong Or To Change Your Mind

Daria is incredibly analytical. Often times, she could be considered overly analytical. And even more often, she creates problems for herself by stubbornly refusing to budge from her principles. I adore and applaud her strength of conviction, but occasionally her unwillingness to compromise creates trouble for her. It holds her back from new experiences and relationships and sometimes it even makes her act like a jerk. The good news is Daria isn’t so headstrong that she doesn’t eventually come to the conclusion that it’s OK to admit when you’re wrong about something and that having strong ideals doesn’t mean there is no room for compromise. Her imperfections make her relatable and her personal growth makes her admirable.

Any Problem Can Be Solved With a Slice of Pizza 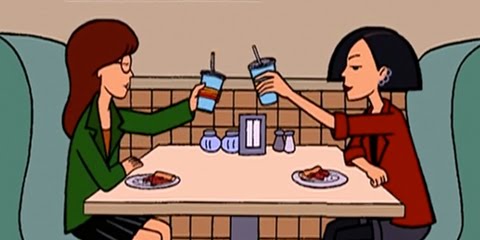 There is no dilemma, large or small, that cannot be solved by sharing your favorite food with your best pal. For Daria and Jane, it’s pizza (for me, it’s macaroni and cheese). Food can be super comforting, plain and simple. So after a disagreement or misadventure, Jane and Daria always find themselves in a booth at the pizza place sucking down sodas and gobbling up calories. For them, it is a sacred and safe place, where everything is right with the world, at least for a minute or two. It's a simple lesson that goes a long way; pizza solves problems.

The Social Norms of High School Continue Throughout Life

Daria: You know, I get the feeling we’ll be saying that all our lives.

I sure learned a lot about life by watching Daria. Lucky for us all, I just discovered it's now streaming on Hulu Plus. What's your favorite Daria moment?