The Dixie Fire in Northern California is about the size of San Diego and has more than 5,800 workers on scene. It's the second-largest active fire in the country as of Saturday. (Courtesy of the U.S. Forest Service)

Pockets of the American West continued to burn over the weekend, as another nine large fires were reported on Saturday in California, Idaho, Montana and Oregon.

The 87 fires still active in 13 states have consumed more than 1.7 million acres. Just shy of 3 million acres have been scorched since the start of 2021, with months left in what experts predict will be a devastating fire season.

In southern Oregon, the Bootleg Fire has become the largest active blaze in the country. The 413,000-acre inferno was contained at 56% as of Saturday night. A fire line has been constructed around the entire perimeter, ranging from 100- to 150-feet wide between the burn and unburned areas. However, that fire line may have to double, up to 300 feet, to prevent the fire from spreading.

The U.S. Forest Service is predicting critical fire weather over the weekend in the Bootleg Fire area. Drought conditions, combined with low humidity and strong winds, could increase fire activity, potentially carrying embers and creating nearby spot fires. Residents in neighboring Lake County have been advised to be prepared to evacuate should things take a turn for the worst. Officials don't anticipate the fire to be entirely contained until the beginning of October.

In Northern California, east of Chico, some 5,500 individuals are working to contain the Dixie Fire, currently the second-largest fire in the U.S. As of Saturday, the 244,000-acre blaze was contained at 30%, with crews expecting 100% containment in two weeks. 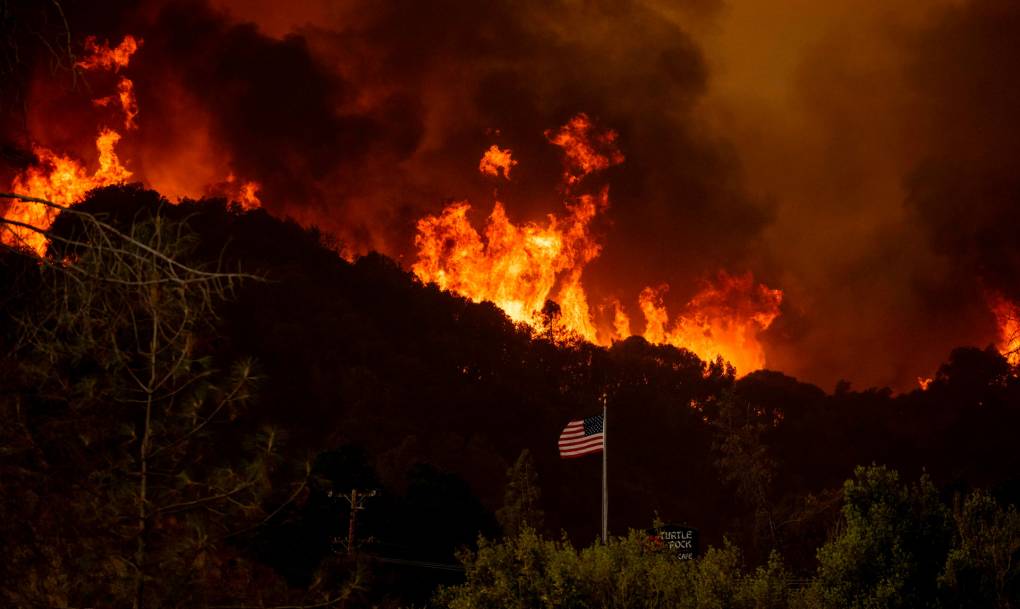 Two weeks ago, the National Interagency Fire Center elevated its preparedness level from 4 to 5, indicating the highest level of wildfire activity. This occurs when large, complex fires erupt across multiple geographic locations, which threaten to exhaust firefighting resources. A Boeing 737 airtanker all the way from Australia touched down in Idaho last weekend to help. The aircraft can carry up to 4,000 gallons of fire retardant and will be used as needed across the country, NIFC said.

More than 22,000 personnel are currently assigned to wildfires across the country, sometimes moving from one incident to another. The two biggest fires are occupying approximately one-third of the nation's active wildfire personnel. The Bootleg Fire, about the size of the city of Houston, has 1,900 workers tending to it. The Dixie Fire to the south is slightly smaller than the city of San Diego and has almost three times the number of personnel working the area than that of the bigger Bootleg fire.

What was once known as fire season is slowly becoming a year-round problem, according to the U.S. Forest Service. Now, the agency is worried about burning through limited resources.

"For years, agencies relied on seasonal firefighters for summer months, but now that wildfires are burning into the winter, they need to reevaluate their hiring plans," read a USFS blog post this week. "Wildland firefighting agencies also need to evaluate the way they conduct training for year-round fire, as well as how to handle the inevitable workforce fatigue."

In the remainder of the year, fire conditions will likely get worse before they get any better. According to a fire outlook report released by NIFC, the months of August and September are expected to have above-average fire activity before conditions improve in October.