On Sunday the Coalition of Immokalee Workers (CIW); participants of the Community Food Security Coalition's Food Justice conference and Bay Area community allies marched in Oakland for farmworker justice. The destination was Trader Joe's where the group planned to deliver a letter, calling on the company to support human rights for farmworkers, specifically the workers who harvest tomatoes sold in their stores. The CIW's Campaign for Fair Food has gotten commitments from other food industry corporations (including Taco Bell, McDonald's, Subway, Bon Appétit Management Co. and Whole Foods) to provide a penny-per-pound increase to raise wages for tomato harvesters and to use suppliers that abide by a strict code of conduct for farmworkers. Trader Joe's has been repeatedly called on to support these efforts but has not been willing to sign an agreement with CIW. TJ's made a statement regarding the issue on 10/21/11 (posted on website 10/23/11) and CIW responded. CIW basically claims that TJ's solutions are not verifiable and lack accountability. Since the public image of Trader Joe's relies on being politically correct and it ranks as a top ethical company the marchers' messaging calls into question the company's lack of transparency and potential hypocrisy: "Traitor Joe's - a wolf in sheep's clothing?" The marchers did not obtain a permit so they peacefully marched along the sidewalk for two miles from the Marriott in downtown Oakland where the Food Justice conference was being held, past the Occupy Oakland encampment, along Lake Merritt and concluding the march at the Lakeshore Avenue Trader Joe's. One of the consistent chants reflected the influence of the Occupy movement: "Trader Joe's owners are the one percent, one penny more won't even make a dent."

Once the marchers arrived at Trader Joe's, Lucas Benitez went inside the store with others to present the management with the letter and explain their intent. Meanwhile, the marchers chanted in front of the store.

It will be interesting to see how Trader Joe's responds to the continued efforts of the Coalition of Immokalee Workers. 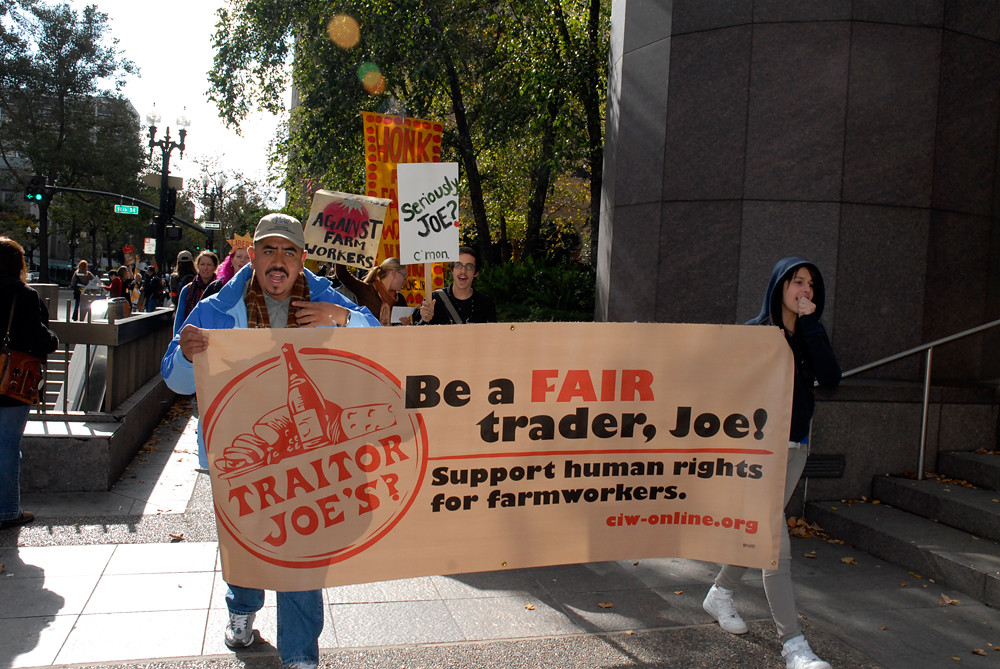