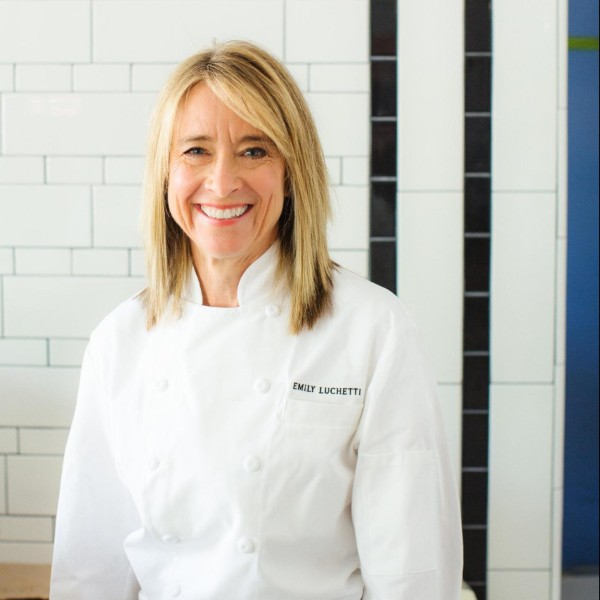 Emily Luchetti has helped to define what great pastry in America means. After attending culinary school and working within New York restaurants and Jeremiah Tower’s legendary Stars in San Francisco, Emily switched to the sweet side of the kitchen and didn’t look back. She was the pastry chef at Stars for eight years and also co-owned the retail bakery StarBake. Emily was then Executive Pastry Chef at San Francisco’s Farallon from 1997-2014 and Waterbar from 2008-2014. In 2014, she joined the dynamic and creative team at Big Night Restaurant Group (The Cavalier, Marlowe, Park Tavern, Leo’s Oyster Bar). Emily’s pastry style is focused – she creates simple, elegant desserts that are full of flavor. “My goal in creating desserts is to make them fun, straightforward and flavorful – desserts designed to please, delight and just make life rosier,” she said. Emily has authored many books on the subject of pastry. Among them are Stars Desserts (HarperCollins, 1991), Four Star Desserts (HarperCollins, 1995), A Passion for Desserts(Chronicle Books, 2003), A Passion for Ice Cream (Chronicle Books, 2006) and The Fearless Baker (Little, Brown and Company, 2011). Her first two books were re-released asClassic Stars Desserts (Chronicle Books, 2007). Emily’s honors include the 1998 San Francisco Focus Magazine Pastry Chef of the Year, the 2001 Women Chefs & Restaurateurs Golden Whisk Award, the 2003 Food Arts Magazine Silver Spoon Award and the 2004 James Beard Foundation award for Outstanding Pastry Chef. In 2009 the San Francisco Chronicle chose Emily as one of the 20 Visionary Chefs in the Bay Area, and she was inducted into the Culinary Pioneers of America. In 2012, she was inducted into the James Beard Foundation Who’s Who of Food & Beverage in America. Emily is passionate about teaching and mentoring chefs and restaurateurs, serving as a Dean at The International Culinary Center in New York. She is the founder ofdessertworthy a movement to empower people to be more mindful of their sugar and fat indulgences. From 1994 to 1999, she served as Chairperson of Women Chefs & Restaurateurs. Emily has served on the James Beard Foundation Board of Trustees for the past 10 years, four years as the Chair of the James Beard Awards Committee and five years as the Chairperson for the Board of Trustees. She also serves as an Oxfam Sister of the Planet.