Arnold Schwarzegger is one of five California governors in a new public service announcement urging people to wear face coverings. (Courtesy the State of California)

Gov. Gavin Newsom and former Govs. Jerry Brown, Arnold Schwarzenegger, Gray Davis and Pete Wilson may not all agree on much, but they're teaming up in a new public service campaign with a single message: "Wear a Mask."

The five governors all appear in a clever and playful 56-second public service announcement, produced by the advertising firm ATTN: in collaboration with Newsom's office, that is intended to encourage Californians to wear a face covering to fight the coronavirus.

"Look, nobody wants to wear one of these things," says Brown in a somewhat muffled voice from behind a blue mask.

"This is not about being weak," Schwarzenegger says, holding up a mask.

Davis adds, "It's about fighting the disease and keeping our families and ourselves safe."

"It's about getting Californians back to work," Wilson chimes in.

The campaign comes days after the California Department of Public Health issued updated guidance requiring Californians to wear face coverings in most settings outside the home. Epidemiologists believe masks, which are intended to protect others from getting infected more than protecting the person wearing the mask, can greatly reduce spread of the disease.

But increasingly, whether or not to wear a mask has gotten caught up in the nation's political and culture wars, with President Donald Trump refusing to wear a mask in public and his campaign not requiring them of attendees at his recent political rally in Tulsa, Oklahoma. And when former Vice President Joe Biden wore a mask in public for a Memorial Day commemoration, Trump mocked the way Biden looked. 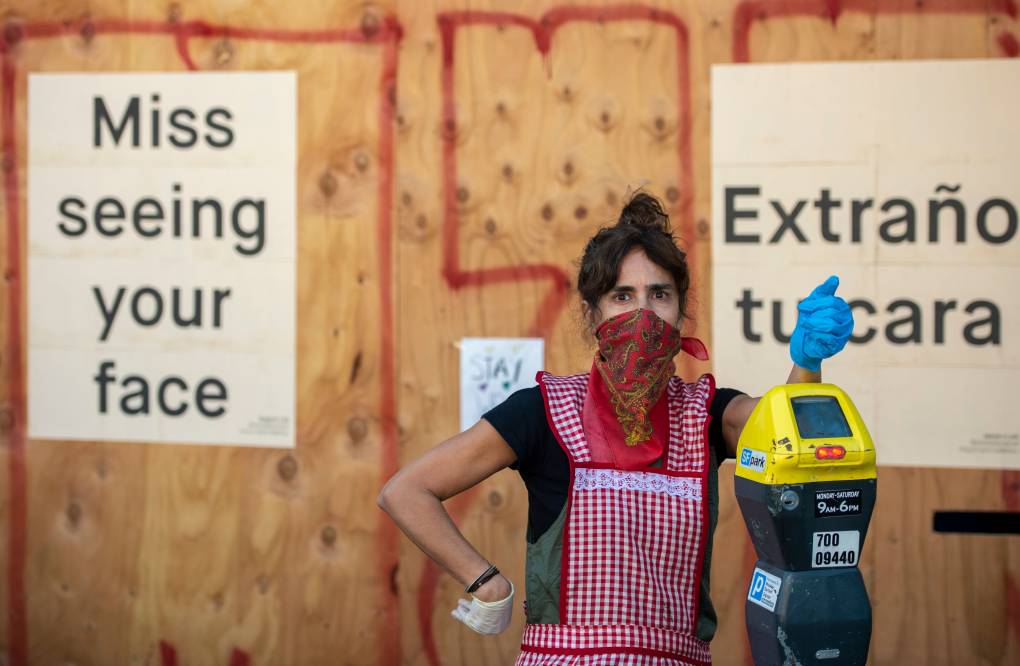 The PSA with three Democrats and two Republicans is intended to break through the politics with a united, bipartisan message.

"This isn't over," Wilson says in the ad.

"So do your part," urges Schwarzenegger.

The PSA is the kind of campaign U.S. presidents and former presidents would wage together in the past as a bipartisan, unified fight against natural disasters. For example, George H.W. Bush and Bill Clinton worked together on financial relief after the 2010 earthquake devastated in Haiti.

In different times, former living presidents like Barack Obama and George W. Bush would be called on by the sitting president to help with the kind of COVID-19 message represented here. But Trump has made a point of saying it's not his style to do such a thing.

In a written statement, Newsom, who has gradually allowed counties to reopen their economies said, "Simply put, we are seeing too many people with faces uncovered — putting at risk the real progress we have made in fighting the disease.

"California's strategy to restart the economy and get people back to work will only be successful if people act safely and follow health recommendations," Newsom said.